The water pump is suck a silly little thing.

In reality, pushing water around an engine to keep it cool, is pretty simple and prehistoric feeling.  I know it does it’s job and I know that my motor and complete motorcycle and the designers at KTM, take its job very seriously.  But, how complicated can it be?  Spin around in circles, pressurize the fluid, shove it around the motor in passageways, send it back up to the radiators where it can transfer the heat to little fins, then air passing over those fins can whisk it away so that it cannot harm things with keeping too much heat inside the blessed powerbox.

I guess when you say it that way, it is more complicated than I first admitted.  Even though I called it barbaric at first, I guess it really is pretty sophisticated.  It generally works pretty well, until it doesn’t.  When you cake the entire motor with 20 pounds of mud, trapping in even more heat.  When you follow that up by packing the radiators full of another 10 pounds of mud so that no air can pass through the radiators dispersing the heat that the fluid is trying to transfer away from the motor.  When you then spend an hour or more just sort of idling because the race course has broken down so badly, and you suck so much at riding in really muddy conditions…  Lot’s of bad things happen.

Turns out, the weak link is the little seal behind the impeller pump.  That seal has a tough job.  It is meant to let the impeller shaft turn freely, so that the impeller can send all that hot fluid blitzing around the motor transferring heat to the air.  In addition to that, it has sort of a one way feature that keeps the pressurized fluid from getting past the seal and contaminating the oil on the other side of the seal.  Kind of a tough job for a little blue piece of rubber and metal.  In fact, the seal is the weak link.

I guess when that fluid gets hot enough, and the oil on the other side is also getting fricking hot, it just kind of gives up eventually and lets all of that fluid kinda mix together.  It results in a situation a little bit like this scene and Bill Murray’s final proclamation in the movie Ghostbusters (the real one).

I do not think I can be talked into doing another race like last years Leaf River at the end of the year.  It was snowing at the start, that turned to rain during the event and ended up in a shortened absolute mud slog that I do not think anyone other that Patrick Malarkey enjoyed.  The other races that I can remember like that (2008 Big Buck GNCC, 2008 Unadilla GNCC, 2015 Adams Harescramble) also kinda sucked.  But only Big Buck and Leaf River did actual damage to the motorcycle. 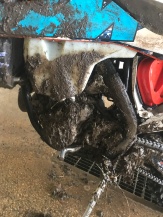 That is a bad looking motor caking.

That may look like chocolate milk type drink that I am half through, but in reality that is what the oil looked like coming out of the motor. 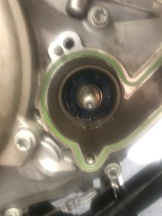 Yuck. Is that even oil?

And just like that, the bike has been completely rebuilt (new clutch, new bearings on all wheels, swingarm and linkages, new rings, valves adjusted, cleaned out everywhere, suspension updated, new drive parts, new brake pads, new bars and grips, new plastic…)  Just waiting for graphics, and then bring on the season.