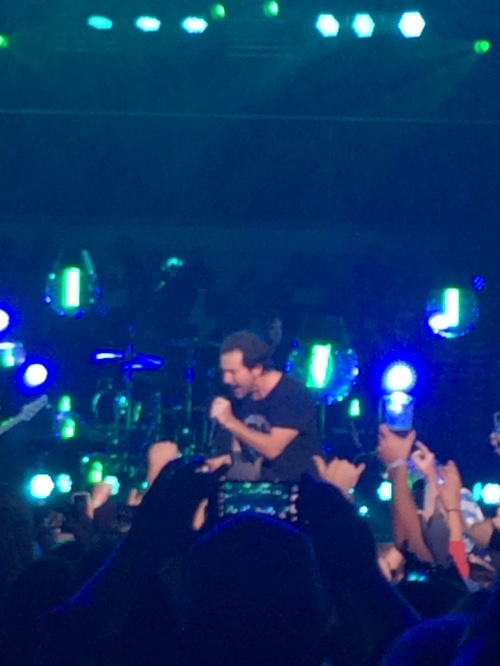 About 3 ft away from us. Brush with greatness.

Here are some facts! 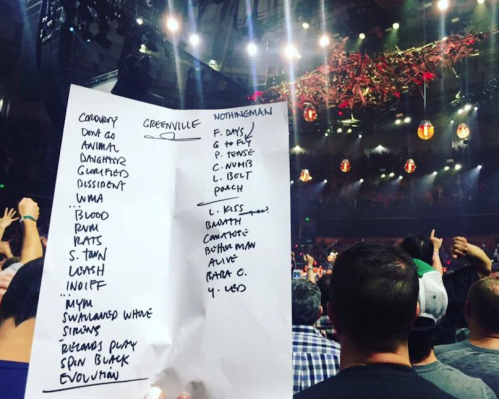 If you have not been to a PJ show, then you may not know that the setlist is a big deal. They are never the same (never), and they make the show. This time with the album Vs. played front to back in there was really special.

The setlist was amazing. If you have not been to a show, you may not know that no 2 shows are the same – ever. The setlist is a big deal.
I meet so many people, from all over the country at concerts. It is really cool to meet people with the same passion. I always find that I am really just a casual fan when I have only been to a small number of shows. I routinely meet people who have been to 50+ shows or 100+ shows. Everyone goes to multiple shows, people take whole months off their lives to follow around and go to 20k people concerts all over the world. I was there at 9am to pick up my tickets for an 8pm show, there were 2000 people in line for the doors to open at 6pm. There is food, music, beer, games etc… beforehand, like an outdoor event.

PJ band members can always be seen around town the day of, riding bikes, taking photos, with their families and friends. They are approachable on the street on at the sites in the city. The band is politically and socially responsible and they are not shy about that. They wear their politics on their sleeve – literally. Ed commonly wears a shirt with an anti gun message, or positive social responsibility message. He railed against the southern states and their stance on “religious freedom”, and he was in a southern state. If you are a PJ fan, you have come to accept that the band is going to be controversial in their stance – it is part of the story. But, they respect their fans and respect that they may have different views.

Going to a PJ show is actually an experience that helps you build some faith in America, because as the band has said, “We are all just people and people are so much alike around the world. We all just want a safe place for our families to live, to have good friends of our own choosing, to get drunk when you want to, to love who you want to…” In the end, I think that faith is what keeps us all coming back.

See you at another show.