“Hey, you left something off your calendar.  What about Full Gas Sprint Enduro?”  It was from Jason Hooper.

You see, I had published my racing calendar for the year, on this blog site.  Some people commented on it, some just ignored it (that is probably the prudent thing to do with any entry on this site.)  I planned to do a bunch of interesting races this season, instead of following just one series.  Hooper called me out on it right away.  “They are interesting, and you have never done one…?”  He was right about that.  I had never done one, and after doing one, he is also write that they are really fun.

“They are all pretty far away”, I replied.  “Indiana is not that far”, Jason prodded.   “Ok! I’ll be there.”  And that was that.  I jumped on the website and signed up early.  That was another of Jason suggestions.  So I did.  (I am pretty easily pushed around when it comes to traveling to do a good race.  It is really funny, that going somewhere to do a race is such a big thing with me.)

I will let you in on a little secret.  I suck at Enduro.  I am more of a harescrambles and GNCC guy.  I know what you are thinking, isn’t it all just a trail in the woods and a dirt bike?  Well, it is but….  it is just so different.  Harescrambles is just all go.  Enduro has that go and then stop and then go again thing.  I think it is all just too complicated for me.  I am just kind of a go person.  But, maybe I just need to go do more of them.  As I found out, nope… I pretty much am what I am. Woods go, stop when I am done kinda guy. 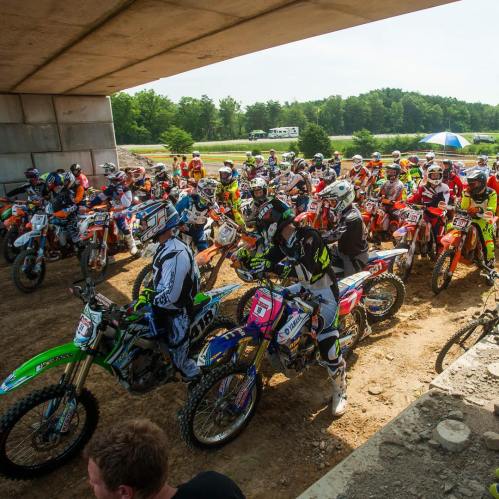 The chaos of the start area. Not the most fun part, but you can tell we are all anticipating.

So, the Sprint Enduro thing is something they do in Europe.  It is basically a “special test”, which is just the Euro fancy way of saying it is a trail that you are timed on, followed by a rest then another “special test”.  It is go as fast as you friggin can for 9 minutes then stop and do it all again after 30 mins stoppage.  The “tests” are sometimes tight and sometimes fast, sometimes grass track sections and sometimes straight up motocross trail.  The first loop in the Indiana track was a motocross track mixed with 2 different grass track sections.  The second loop was a more enduro type loop with some tighter stuff and a GP type rolling track, with an endurocross section at the end.

In spite of going to the track early, I somehow ran out of time to look at the track before hand.  It meant that I was going into the first day without any idea of what the track was.  It made the first runs not really very good for me.   That combined with the first time on my motorcycle in 4 weeks, and I suuuuuccckkked – Day 1.  I think I ended up 3rd in my class, but that was only because I got lucky.

Ride along with overall winner Daniel Milner.  It is only about 7 minutes so you can handle that.  Unfortunately, I was not just 7 minutes for me to do a lap.

The first day was hot as hell.  It was Alabama, Perry Mountain 24hour race hot.  Like 100 degrees and high high humidity, made for it being a sauna.  It was hard to get away from the heat, or impossible actually.  We were all a sweaty mess by the end of the day.  Dirty, sweaty, dehydrated but smiling.  It is really hard to have a bad day while racing your dirt bike.

Lots of fun to be had.

We woke up in the morning to Ryan Gutpile suggesting that we should just go home.  That is not his real name, but that was the name he acquired through the weekend.  You see, my buddy Pete Laubmeier thinks that everyone needs a nickname.  Speedy, Twinkle toes, smoothy, Vanderbopper etc…  Ryan woke up looking at his radar on his dot com device and felt that his bike was going to get all dirty and he had a run in his stockings.  Eventually, we convinced him to plug up his man-gina and just ride, and sure enough the rain did not happen and he had a good time.

This day was not nearly as hot as the 1st day.  It was cloudy and threatening to rain, but it never did.  We ran the moto loop in the opposite direction, but the enduro loop in the same direction.  This all helped me.  I am so much better at riding when I know the loop.  It made it so my loops were fast and consistent.  When I look at the lap times, I had a decent battle with Robert Kirchner.  But, since this is a time trial against the clock, you just do not know that.  Our lap times were pretty much right on top of each other, then he had a mishap on his last test that allowed me to slip by him into 2nd for the day.

All in all, it was a great time.  6 of us went down to do the race.  Mat Herrington, Jay Mittelstaedt, Scott Rohlfing, Pete Laubmeier, Ryan Grotegut and Joe Barr.  Joe did not have the best race, as he pile drove himself early in the first day, then was just spectating for the rest of the time.  Speedy recovery to him.  But, we all had a grand time.  We will be back.

Finally, you get Cole Kirkpatrick’s brilliant 60 second video of the event.