Now that ski season is over…

Me pretty dead after the Birkie ski race this year.

I am so ready for a 2 wheeler season to begin. It feels like it has been forever. I am really tired of looking at the world wide interwebs to get my 2wheeled fix. I do not want to watch anymore race videos from last year or youtube go pro’s of National Enduro’s that I could not go to, or great MTB trails or…  I would be happy to have just about any 2wheeler season, Bicycle, motorcycle. GNCC, MTB enduro, road cycling, local HS, local Enduro… I think you get the picture. I know my 2 wheeler friends feel exactly the same way.

This year I decided to go back to XC skiing. It has been a long long time since I was actively doing that. In fact, about 14 years had passed since I had done the Birkie ski race. That’s a long long time to be away from something, in the scheme of things. I pulled out one pair of my old skis, they had a 1998 finisher decal on the tip. Wow. (Those skis ended up being donated to bringing my daughters boyfriend into part of the ski world.  Of course I regretted that, as by the end of the season I could barely ski faster than him.  But that is another story…)

So I took the plunge and signed up for the Birkie this past fall. It had been so long since I had done the race, I would be starting in the last wave. There would be 10,000 skiers ahead of me. OMG! So I reached out to the Birkie people, “can I be in an earlier wave? I mean, I used to be in the 1st or 2nd wave!” They looked it up, and replied “Joe, that was more than 10 years ago”. Good point. In the end, they let me up to the 4th wave, and as it turns out, that is about where I belong. I am a lot slower than I was 15years ago.

I did it, and I had a grand time. Looking forward to next year when I can try to better my time. But, now that ski season is over, I am ready to break out the 2 wheelers.

First race of the year. In our part of the world, yep – you do still have snow on the ground when that happens.

As you may know, I am pretty dedicated to my 250XCF.  I feel good on it, and I really feel the power lends itself to my riding well.  I am reasonably fast, for an old guy.  Not anything like an AA rider, but fast enough.  As I say, faster than some – slower than many.  But, I dig it.

But, in spite of digging the 250XCF, I have been wanting to try a 2 stroke again for some reason.  I do not know, the sound of them when they are running well or the perception of being really light and airy, or the sexy big bulb in the pipe or… I really do not know why.  I guess it also could be that I want the simple maintenance involved.  Don’t really know.

But, I did not want to take the full plunge.  You know, get rid of my 4stroke and buy a bunch of jets and, clutch kits and throttle tubes and …. blah, blah, blah.  You know, of course all the stuff is different.  I have a garage full of stuff that is all to support the 250XCF habit.

So I thought I would try it out by buying a used 200XCW, while keeping my 250XCF.  That way, plastic and wheels and tire sizes and seats and a lot of things are shared between those bikes. 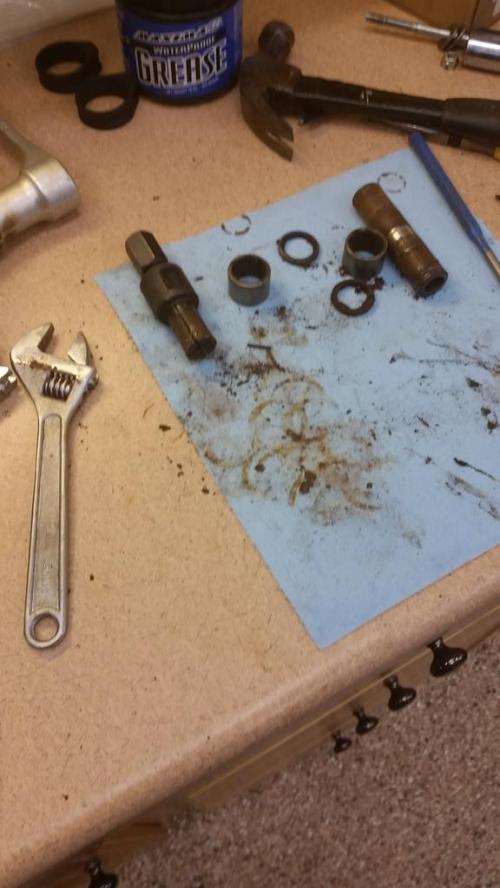 Lots of moments like this on your bench when you have 2 bikes to rebuild.

First thing to note, is that 2 bikes is a lot more maintenance than 1 bike.  I have done this to myself before, and have told myself that I would not do that to myself again.  Since I was doing the experiment this season, I decided not to buy a new 250XCF.  Instead, I would rebuild my bike from last year and race it again this year.  That meant, that last years bike needed everything.  Bearings, top end for the motor, my race wheels were shot, the seat foam was gone, all the plastic needed to be binned, drive parts all needed to be replaced, all fluids needed to be flushed etc…  It was a big project.  But, when it was all done it felt like a completely new bike.  You know that feeling, as I know you have done a bike up like that as well.

The problem is that when you have 2 bikes, you are not ready for the season yet.  You have another bike to go.  One thing I have learned again, is that when you buy a used bike – you are now downstream of someone else’s maintenance habits.  Even though what I was buying was a 1 year old 2014 200XCW, it was in pretty rough shape.  Lots of bad looking stuff inside the motor, oil that was beyond disgusting, piston and head with a ton of carbon, pretty dirty power valve etc…  Those are all pretty much what you expect when you open up a motor after a year of use.  But, I did not expect the state of the rest of the bike to be so beat up.  Missing hardware holding plastic on, bad bearings, headset parts missing, jerry rigged set ups holding the odometer on and other places, leading seals etc…  The 2nd bike needed everything the first bike needed and even more.  But, after a huge refresh – that bike also feels as good as new. 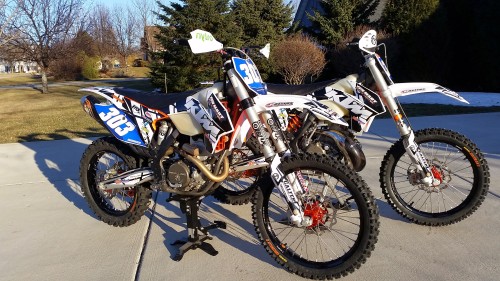 The grand experiment. A smoker in the mix.

So, the grand experiment year starts for me.  I am planning to do a bunch of different race formats this year – GNCC, local HS, WIXC, Enduro etc…  I plan to try the new little 2stroke in each of those formats to see what I think.  I still have the 250XCF to fall back on if things are not working in one of those formats for the 2stroke.  But, I suspect in the end it has way more to do with the owner of the right wrist than it does the steed.

My bench has been covered with parts like this all winter.

The lists seem to go on and on…