Wow, there are leaves on those trees!

This past weekend, was round 9 of 13 race local season.  It was my 8th race of the local season, and it was a pretty good one.  All in, I am a record of 8 wins and 1 second place.  But, the numbers do not tell the whole story.  I will get back to that later, but first…

As you know I have been struggling with my eyesight this year.  I chronicled the beginning of my season and my eyesight struggles earlier here in this early season blog entry.  I solved it thus, or at least made it much better with the old goggle inserts.  What I did not tell in that early entry has been my struggles to get my goggle inserts updated to my new prescription, bear with me through this as it is a story all right.

So, I was doing really well with my old prescription goggle inserts, but felt that there was still something left on the table.  With my regular glasses, the old prescription was not cutting it anymore – at least in the face of the new prescription.  Wow, I could just see so much better.  So, I ordered up some additional inserts for my new Oakley favorite schweet goggles – they are different don’t you know, at least from my old inserts and the old will not work in the Oakley.  So hey  – I forked over my prescription to Drew @rxgoggles and he pounded out some new lenses for me.  Woot.

When they arrived, I plopped them into my Oakley’s, went out to the MX track to lay down some sweet laps at a pace that I just knew would be better than I have ever done before – I mean I can see you know.  But something went completely wrong.  I could not see a thing.  I was getting a case of vertigo and was having a horrible time seeing.  Things were screaming up on me from the sides and I could not see a thing.  It was way way worse than without any inserts.  I went into a complete funk.  That is it, my offroad racing passion is completely shot – I am a trail rider in the future at best.

Chasing Pete early in the race.

There was a funny little EnduroX section that was trying to slow us all down. By the end of the race it was just a jump over section.

After I moped around for a while all grumpy, I decided to go and talk to the eye dr.  She measured all my glasses and declared that my base curve on the new inserts were all wrong.  I called up Drew @rxgoggles and relayed the story and he said send them back and we will rework.  (both pair – it is a long story)

So, many hundreds of dollars later I have the coolest most valuable 6.5 base curve corrective goggle inserts ever.  Ever.  You cannot imagine how much I have paid for these.

This past weekend at Cecil, I decided that I was using them and forcing myself to  adapt even if they were not right.  I wore them on my MTB while I did a loop on the course before the race and, wow – they seemed really good.

So, I set them up on the goggles and went to the line.  The gun went off and I dropped the clutch.  Nothing.  I was not running.  I hit the button again and it still did not start.  Finally on the 3rd try it started.  I went into the woods in about 15th place.  On a fast course it was hard to make up time and tough to find lines.  It took me till the 3rd lap to catch Pete (who of course got the holeshot – again.  What is it with his starts vs. mine?  I have not gotten a start ahead of him all year.) 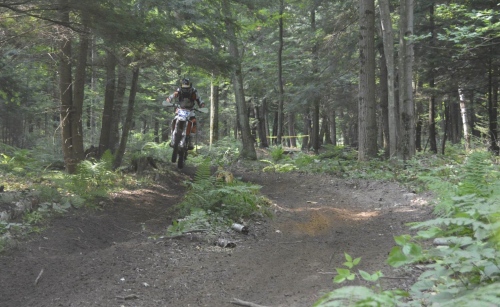 Eventually I figured out how to go fast, but not for the whole race.

In general these days, I have a bad case of office hands.

Pete stayed in front of me for about 3 more intense laps, then made a mistake and I got around him while he was on the ground.  I think I taunted him went I went by, not nice but we have a fun rivalry going between us.  At that point I put my head down and did a couple of hard laps and got a gap on him.  Unfortunately, at that point I kinda ran out of gas (3 weeks in europe eating crap food, not sleeping well and drinking too much beer, had left me without enough energy).  I cruised from there and managed to finish about 2 minutes ahead of Pete in second.  Pete had banged his knee, as he said trying too hard to go fast.  Felt bad for him.

OMG!  I could see so much during the race!  I could see leaves on the trees even.  I found myself riding along saying to myself “Look at that, a hole.  Oh look, there is a line over there I could take.”  It is really amazing how much more you enjoy the race when you can see the trail.  Cecil was actually way more fun that I thought it was going to be.  It was fast, but felt a lot like a short GNCC course.

So with 4 races left I have a handy 35 point lead over 2nd.  That will get gobbled up a bit as I have to miss one of those races yet this year.  But, I am feeling good about the way I have been riding I hope I will be fine and will finally achieve my goal of winning the overall for a season.

The video below was taken by Monty Griffin.  He races my class, is a class racer with a big heart that always takes a nice little video of the course.

Gravity is a really cool thing.

Posted on 8 July, 2014 by Joe Vadeboncoeur | Leave a comment

At the risk of getting all Tom Jones on you, I know that you know that what goes up must come down. That is a gravity thing, and it is pretty cool. It means when you go up a trail you get to come down. It is what MTB Enduro is based on. Ride up some road or trail and then time yourself coming down a section via gravity. I am sure there is some pedaling involved, but it is basically a gravity kinda thing.

Downhill is a gravity dominated activity. Unlike MTB Enduro, in DH there normally isn’t any hiding behind your ability to pedal up something. It is not like there isn’t any fitness necessary – oh there is. It is a bit like people’s perception of Motocross. The perception is that the bikes are so technical, that all you do is clamp yourself on to the things and they do the work for you. If you have not ridden a Motocross bike or a DH bike, you have no idea what you are talking about. They might not require the waif thin thing that XC racers or road racers are, they might not require the pure aerobic ability that those disciplines do. But, they require the ability to operate at a high heart rate and a ton more core strength and upper body involvement.

But, the biggest difference is that those sports (DH and Motocross) while dealing with the upper body strength and the core strength issues, while your heart rate is pegged at a near anaerobic level, they also require that you have handling skills that are never required on an XC bike or a road bike.

That handling skill and resulting amazingness is what makes watching those sports so much fun. I mean it is exciting to watch the pure athletic aerobic ability of an XC racer or a road racer. But, it is the death defying handling ability of DH racers or Offroad motorcycle racers or Motocross racers that is so fun to watch.

Take a look at these video’s and you will identify with what I am talking about.  In the end, it is all 2 wheelers so it is all good.

The above video shows the skills required to be a DH racer.  This is a practice run, so there is a lot of effort to be stylish.  In a real race run, there is not really any coasting and certainly another 20% of pace effort.

That video is from the Ironman GNCC from 2013.  A crazy hard 3 hour race up and down the mountain, over and over and over.

There is a bunch of really good slow motion in this video, showing how much body language it takes to make a mountain bike work in that terrain.